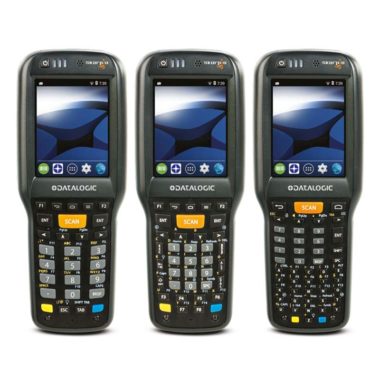 The Datalogic Skorpio X4 is a real all-rounder. With its wide range of options, it can be used flexibly in almost every area - whether retail or warehouse, with Android or Windows, with pistol grip or without - the Skorpio X4 is always the right choice. Choosing between three different keyboard designs further enhances its individual versatility.

The Skorpio X4 from Datalogic offers wireless data transmission via Bluetooth and WLAN and is also equipped with MIMO antennas. The 3.2-inch color touch display guarantees fatigue-free working. There are three versions of keyboards to choose – 50 alphanumeric keys, 38 functional keys and 28 numeric keys. The Skorpio X4 can be equipped with Android or Windows, with or without a pistol grip and is therefore extremely changeable.

Datalogic’s Green Spot technology enables particularly convenient scanning, additionally it features linear 1D and 2D reading capabilities. It can be equipped with a pistol grip for scan-intensive tasks such as picking or inventorying.

The Skorpio X4 has a protection rating of IP64, verifying its resistance to dust and splash water. This mobile computer is also protected against falls of up to 1.8 m due to its robust construction.

Datalogic’s Skorpio X4 is a handy mobile computer that offers a variety of functions and options which makes him an ideal choice for your business.