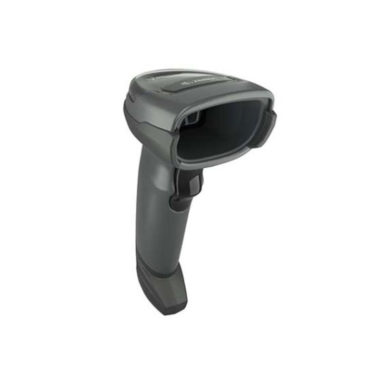 The multi-purpose barcode scanner series DS4600 by Zebra provides a range of high-performance handheld scanners for various environments. The DS4608-DPE barcode reader was particularly developed for light manufacturing and electronics manufacturing settings. The DS4608-SR and DS4608-HD models are ideal for retail and hospitality tasks. The DS4608-HC is suitable for all sorts of healthcare facilities. Each version is equipped with the features required in certain environments, providing employees with the tools they need to add efficiency to their working processes.

Zebra’s new corded barcode reader series DS4600 sets the benchmark for outstanding scan performance. The integrated imager reads 1D and 2D barcodes regardless of the condition. It captures barcodes, whether they are printed or displayed on a screen, ensuring versatile use of the devices. Packages are oftentimes labelled with wide barcodes. As the handheld scanners of the DS4600 series are able to read wide barcodes, there is no need for extra barcode readers in the receiving area.

The data acquisition devices of the DS4600 series by Zebra are equipped with an 800 MHz microprocessor enabling fast and efficient data capturing and processing. Zebra’s PRZM platform enhances scanning performance and reduces energy consumption. With DataCapture DNA, Zebra provides superior tools for an easy integration of the barcode scanners and optimized usability. DataCapture DNA allows simple remote management of scanners throughout the company and includes visibility tools. It also enhances productivity, for example by providing Multi-Code Data Formatting (MDF) enabling the capture of multiple barcodes at a time, and “Preferred Symbol”, which enables the capture of one single barcode without covering nearby barcodes. For out-of-the-box deployment, the barcode scanners of the DS4600 series are pre-configured for the most common applications and automatically select the right interface.

The Gooseneck Intellistand is a useful accessory, which enables quick switching between handheld and presentation scanning. The devices automatically set the corresponding mode. The Zebra DS4600 barcode reader series excels with a robust design. The devices are sealed against the ingress of dust and liquids in accordance with protection class IP52. The recessed scan window protects the built-in optical components. The DS4600 series handheld scanners can withstand drops from a height of 1.8 m to concrete and survive up to 2000 tumbles. No matter how challenging the environment may be, the DS4600 series scanners are extremely durable and made for everyday use.

The Zebra DS4600 series is designed for three application areas:

The Zebra DS4608-DPE is ideal for production environments, for example the electronics industry or other light manufacturing areas. It enables the capture of all kinds of Direct Part Marking (DPM). Because of its integrated diffuser, optimal illumination is ensured: indirect illumination to capture codes from shiny, reflective surfaces and direct light for low-contrast barcodes or laser-etched marks. The DS4608-DPE is also able to decipher high-density barcodes as well as extremely wide barcodes with a width of up to 10 cm. Noisy industrial environments require clear haptic good-read feedback. This is why the DS4608-DPE handheld barcode scanner is equipped with a vibration feature. Additionally, an LED indicator and an acoustic signal provide confirmation. The robust DS4608-DPE barcode scanner is available in Twilight Black and it is optimal for accurate data acquisition in light industry areas.

Perfectly suited for applications in the retail and hospitality sectors are the Zebra DS4608-SR/-HD barcode scanners. The versatile handheld scanners allow a large scan range of up to 70 cm, enabling the cashier to scan bulky items in the shopping cart conveniently from the cash desk. Customers can be served quickly and long waiting queues be avoided. The DS4608 scanners read 1D and 2D barcodes from displays or from paper, even through shrink film. Some products are labelled with particularly small tags, for example, spectacle frames or jewelry. The DS4608-HD is able to capture high-density barcodes and is therefore ideal for tiny price tags. The data capturing devices of the DS4600 series by Zebra for the retail industry can also be equipped with OCR for document capture. By means of OCR it is possible to capture a document as an image, a bill, for example. Optionally, the scanners are available with EAS support, automatically deactivating electronic article surveillance tags when scanning the product at the checkout. The user gets visual or acoustic feedback after the barcode has been successfully scanned. The DS4608 barcode scanners for the retail and hospitality sectors are available in the colors Nova White and Twilight Black.

Tailored to the needs in healthcare facilities, for example, hospitals, pharmacies or laboratories, is the Zebra DS4608-HC. It reads all sorts of barcodes that are common in healthcare areas and regardless of the barcode quality. Even extremely small and curved barcodes on medicine bottles or patient’s wristbands do not present a problem. The corded handheld scanners come in Healthcare White to suit medical environments. Different feedback modes let the user know, if a barcode has been successfully captured. The beep tone can be adjusted in tone and volume. Besides, there are a visible LED indicator and a vibration function. In night mode, the device can be set to silent at the push of a button. The aimer is highly visible yet, because of its warm white light, easy on the eyes. The healthcare model of the Zebra DS4600 series is disinfectant-ready and can be wiped with harsh cleaning agents to ensure maximum hygiene.