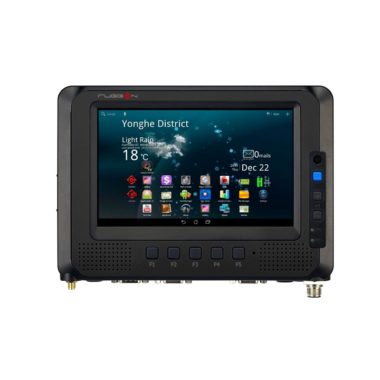 The RuggON RuggVMC MT7010 is made to last – the sturdy and rugged in-vehicle device is highly efficient and ultra-rugged. With its bright 7-inch PCT touch display, it is comfortable to use and good readable even in rough and demanding environments. It provides multiple connectivity options and runs the Android 5.1 operating system.

Because of its sturdy design the mobile computer terminal RuggON RuggVMC MT7010 is the perfect companion for outdoor applications. It complies with protection class IP65 and can be operated within a temperature range from -20 °C to +60 °C. Due to the built-in UPS (uninterruptible power supply), it prevents the loss of data even when it comes to a temporary power interruption.

The RuggON RuggVMC MT7010 has five programmable buttons to make it even more versatile for individual use. The in-vehicle device comes with Android 5.1.

The vehicle-mounted computer terminal is equipped with a 7-inch projected capacitive touchscreen which can be used in every kind of environment. The screen is perfectly readable in bright sunlight. Protection class IP65 ensures protection against dust and water. The RuggON RuggVMC MT7010 can withstand shocks and vibrations according to MIL-STD-810G standards – that is why the computer terminal is an ideal solution for rough environments where sturdy vehicle-mounted devices are essential.

Steady data and voice communication as well as stable wireless connectivity are convincing reasons for using the RuggVMC MT7010 by RuggON. With the DashON management software it can be easily integrated into existing systems. Configuration of the rugged mobile computer is uncomplicated and can be accomplished in no time.